With America's attention on COVID-19, drug makers are quietly raising US prescription prices 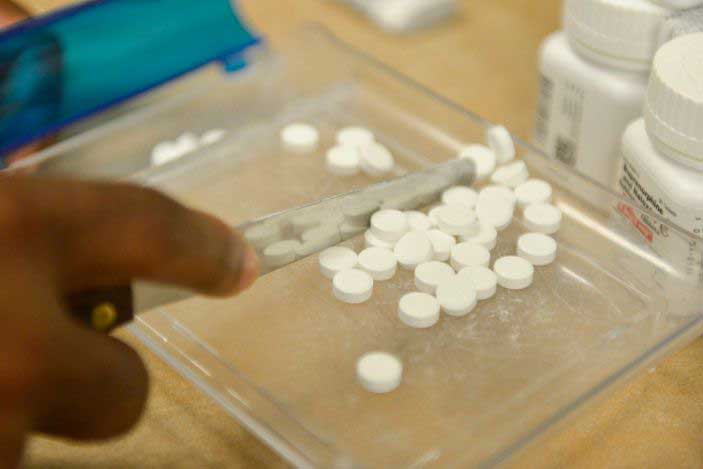 COLUMBUS, Ohio – With most Americans focused on COVID-19 vaccines, pharmaceutical companies are quietly raising the list prices of name-brand prescription drugs at a torrid pace.

January is typically when increases hit the U.S. market. Already, more price hikes by drugmakers have been recorded in less than half a month (813) this year than for all of January 2020 (737), according to research by Ohio nonprofit 46brooklyn.

"It is clear from the data that January 2021 is bucking the recent downward trends in brand drugmaker list price increases," said one of the founders of 46brooklyn, former Ohio Pharmacists Association lobbyist Antonio Ciaccia. "And it is also clear that aside from price increases, the launch prices for new drugs has been going up over time."

The cost of prescription drugs remains among the top issues for Americans, surveys show. Three in 10 say they haven’t taken their medicine as prescribed due to costs, including many who skip doses or cut their pills in half.

It's been a key issue in races from the Statehouse to the White House, with President-elect Joe Biden promising a fix is a high priority for his administration.

Another record might come as well. To date this year, 100% of U.S. changes in drug prices this month have represented increases. That's never come close to happening; the high for the month of January over the previous 10 years is 72%, recorded last year.

Pfizer, which with BioNTech developed the first COVID-19 authorized for use by the federal government, has raised the prices on 193 name-brand drugs this month, although the median increase is a modest 0.5%.

“This modest increase is necessary to support investments that allow us to continue to discover new medicines and deliver those breakthroughs to the patients who need them,” said company spokeswoman Amy Rose in a statement.

However, the price jump was about 5% for several of Pfizer's most popular drugs, such as Xeljanz, which treats rheumatoid arthritis, psoriatic arthritis, and ulcerative colitis; Lyrica, used for nerve and muscle pain; Ibrance, a breast cancer inhibitor; and sedative Xanax.

In January 2020, Pfizer raised the price of just 81 drugs and actually decreased the charge for 20 others. A year earlier, it was 49 price increases and one decrease.

The brooklyn46 Research's dashboard did not show any entries for the other COVID-19 vaccine maker, Moderna, because that company has not yet had any other drugs approved by the Federal Drug Administration.

But in the complex world of drug pricing, essentially no one actually pays the list price, usually called the wholesale acquisition cost. The actual, or net price is greatly impacted by rebates and discounts from the list price, and those hidden factors are rising, Ciaccia noted.

"Due to the general lack of transparency within the entire prescription drug supply chain, the public is left in the dark on our American-made drug pricing dysfunction," he said.

The overall net cost of brand-name drugs actually fell in 2020, while list prices grew at their slowest rate in at least 20 years, according to the online publication Drug Channels.

Of course, what you pay personally is mostly affected by your health insurance.

Although generic drugs far outnumber brand names, the latter account for about 80% of drug spending in the U.S.

Examples of the drug price increases this year, per 46brooklyn:

Sarah Sutton, senior manager for public affairs with the drugmakers' trade group, PhRMA, did not address questions about this year's increases. She did talk about the overall drug supply chain:

"Recent public data shows that net prices for many brand medicines have decreased, but it does not feel that way for patients because of a broken system that benefits insurers and other middlemen and works against patients who need care. We are working on solutions that put patients first by fixing this broken system and lowering what patients have to pay at the pharmacy counter."

2. "Because of the growing drugmaker rebates and discounts to PBMs (drug chain middlemen called pharmacy benefit managers) and governments, it stands to reason that drugmakers would raise their prices to accommodate those concessions."

3. "Because Medicaid programs get the biggest discounts, as Medicaid enrollment swells during the pandemic, that means a growing share of the drugmaker portfolio has shifted to less lucrative market segments, which would also help explain why prices are going up."

Name-brand drugs are protected by a patent for 20 years, including a general five-year exclusivity awarded by the U.S. government so pharmaceutical companies can recoup the money they spent for research and development of the new medication.

“We have an obligation to ensure that the sale of our medicines provides us with the resources necessary to invest in future research and development. noted a 2019 ” transparency report by Janssen, pharmaceutical company of Johnson & Johnson.

The overall financial impact of this month's price increases is hard to gauge. Aside from the cost to individual consumers, government health care programs pay billions of dollars to provide name-brand drugs.

To use but a single example from the above list: The state-federal Medicaid program paid about $2.5 billion nationwide just to provide Humira to low-income and disabled recipients. So just a small percentage price increase could translate into a large dollar amount.

The new 2021 data accessed by The Columbus Dispatch, part of the USA TODAY Network, comes on the heels of a study by the Institute for Clinical and Economic Review, an independent nonprofit research organization, that found no clinical justification for 2019 price increases for seven of the top 10 most popular drugs.

Those unjustified cost elevations added $1.2 billion beyond what would have been spent if their net prices had remained flat, the study showed. The 8.9% price jump for one of those drugs, Etanercept, cost $403 million nationwide – "the single largest impact on national drug spending among all drugs evaluated in this report."

The drug, sold under the brand name Enbrel, is an injection used to treat inflammatory conditions associated with such ailments as rheumatoid and psoriatic arthritis.

Humira also was on the list with unjustified cost increases, which added $66 million to U.S. drug spending in 2019, the research found.

“Several of these treatments have been on the market for many years, with scant evidence that they are any more effective than we understood them to be years ago when they cost far less," said Institute for Clinical and Economic Review's chief medical officer, Dr. David Rind.